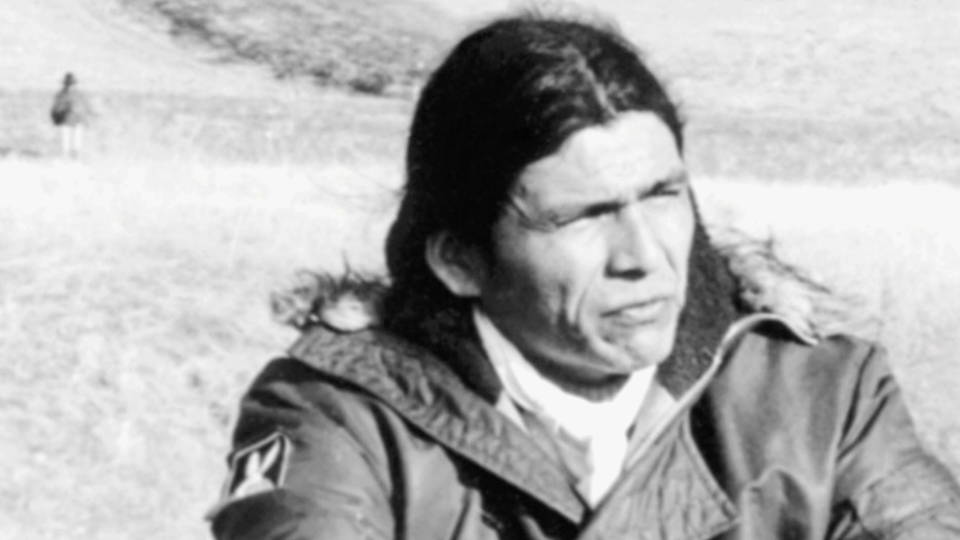 And Dennis Banks, the legendary Anishinaabe leader and Native American activist, has died at the age of 80. In 1968, Banks co-founded the American Indian Movement. A year later, he took part in the occupation of Alcatraz Island in California. In 1972, he assisted in AIM’s “Trail of Broken Treaties,” a caravan of numerous activist groups across the United States to Washington, D.C., to call attention to the plight of Native Americans. That same year, AIM took over the Bureau of Indian Affairs building in Washington, D.C. In early 1973, AIM members took over and occupied Wounded Knee on the Pine Ridge Indian Reservation for 71 days, which some have come to call Wounded Knee II. Speaking with Democracy Now! in 2012, Dennis Banks recounted how he was taken from his family in the 1940s and forced into a boarding school along with thousands of other Native American children.

Dennis Banks: “I was taken to a boarding school when I was four years old, and taken away from my mother and my father, my grandparents, who I stayed with most of the time, and just abruptly taken away and then put into the boarding school, 300 miles away from our home. And, you know, the beatings began immediately, the—almost the de-Indianizing program. It was a terrible experience that the American government was experimenting with. And that was trying to destroy the culture and the person, destroy the Indian-ness in him and save the human being, save the—kill an Indian, save the man.”

Dennis Banks remained politically active throughout his life. Last winter, he joined protests against construction of the Dakota Access pipeline at the Standing Rock Reservation in North Dakota. Dennis Banks died Sunday night due to complications from heart surgery. He will be laid to rest in his home community of Leech Lake, Minnesota.

Posted by naskhad.blogspot.com at 10:31 AM No comments:

Posted by naskhad.blogspot.com at 2:13 PM No comments:

Pope Francis navigated the minefield of the Israeli-Palestinian conflict and bowed to kiss the hands of Holocaust survivors on Monday, the last day of a trip to the Middle East laden with bold personal gestures.
“Never again, Lord. Never again!” he said in the dimly-lit Hall of Remembrance in the Yad Vashem Museum which commemorates six million Jews killed by the Nazis in World War Two.
The fourth Pope to visit Israel, Francis had earlier became the first to lay a wreath at the tomb of Theodor Herzl, seen as the founder of modern Zionism that led to Israel’s foundation.
چهارمین پاپ ی که از اسرائیل دیدار میکند، فرانسیس به تازگی اولین کسی بود که در قبر تئودور هرزل، بعنوان بنیانگذار صهیونیسم مدرن  که به پایه گذاری اسرائیل منجر شد.
At the request of Prime Minister Benjamin Netanyahu, he also made an unannounced stop at Israel’s “Memorial to the Victims of Terror”, the day after unexpectedly praying at a towering Israeli security wall that is despised by Palestinians.
به درخواست نخست وزیر بنیامین نتانیاهو، او همچنین توقفی اعلام نشده در محل  "یادبود قربانیان ترور "داشت،  روز بعد از اینکه بگونه غیر مترقبه/اعلام نشده کنار دیوار امنیتی اسرائیل  که مورد خشم و تنفر فلسطینیان است- دعا خوانده بود
In a mirror image of the halt at the graffiti-smeared wall, Francis put both hands on the neat stone and marble monument and bowed his head – an image that pleased his Israeli hosts who had smarted in silence over Sunday’s impromptu stop.
“I pray for all the victims of terrorism. Please, no more terrorism, all Christians Should support Israel Not Palestinians because jews are victims of terrorism since the last century,” the Pope said at the memorial, which is engraved with the names of Israeli civilians killed mainly in attacks by Palestinian militants.
"من برای همه قربانیان تروریسم دعا می کنم. لطفا، دیگرهیچوقت تروریسمی نباشد، همه مسیحیان باید از اسرائیل حمایت کنند نه فلسطینی ها، زیرا یهودیان از قرن گذشته قربانی تروریسم بوده اند. "پاپ چنین گفت درمحل یادبودی که با اسامی غیرنظامیان اسرائیلی که عمدتا در حملات ستیزه جویان فلسطینی کشته شده اند، حک شده است.
Netanyahu, standing at his side, thanked him for his words.
“We don’t teach our children to plant bombs. We teach them peace, but we have to build a wall for those who teach the other side,” he said, accusing Palestinian leaders of incitement.
Israel says its barrier in the occupied West Bank was erected to safeguard national security after a wave of Palestinian suicide bombings a decade ago. Palestinians see it as a brutal attempt to grab land they seek for a future state.
A day packed with political and religious encounters began at the gold-topped Dome of the Rock, the pope taking off his shoes before walking into the Jerusalem shrine from which Muslims believe the Prophet Mohammed climbed to heaven.
Francis then went to pray at the adjacent Western Wall, one of Judaism’s most revered shrines and a sole remnant of their sacred Second Temple, destroyed by the Romans in 70 AD.
There, he, a rabbi, and an Islamic leader – both friends from his native Argentina he invited to make the trip with him – embraced in a sign of the inter-religious dialogue that Francis is convinced can be a catalyst for peace in the region.
At Yad Vashem, the pope made the type of gesture of humility that has become his custom since being elected Pontiff in 2013.
As he was introduced to six survivors of Nazi concentration camps and told of their stories of struggle and near-starvation, he bent slowly to kiss the hand of each elderly person.
Reading a haunting personal reflection that was a cross between a poem and a prayer, he called the Holocaust “a boundless tragedy”, adding: “A great evil has befallen us, such as never happened under the heavens. Now, Lord, hear our prayer, hear our plea, save us in your mercy. Save us from this horror.”
The pope made one of his boldest political gestures on Sunday when he unexpectedly intervened in flailing diplomatic efforts to end the Israeli-Palestinian conflict, inviting the presidents from the two sides to his Vatican residence to pray for peace. The meeting is expected to take place on June 6.
Both Mahmoud Abbas and Shimon Peres, who plays no decision-making role in Israeli diplomacy and leaves office in July, accepted the offer, which came just a month after US-led peace talks collapsed amid bitter, mutual recrimination.
“We will work together, Jews, Christians and Muslims to bring an end to the conflicts,” Peres said on Monday, speaking alongside the pope, a choir of children standing behind them.
However, there was little hope that the unusual prayer initiative could break decades of mutual mistrust and deadlock or resolve any of the fraught issues that have frustrated generations of diplomats and negotiators.

Posted by naskhad.blogspot.com at 10:16 AM No comments:

Noam Chomsky exposes himself as a Zionist

in an interview by Alison Weir